A powerful place. The North Pennine AONB is a landscape of scarred, runneled, barren moorland. The hills are long, wide and flat, not particularly tall but they emanate a sense of empty, eerie grandness. The valleys – ‘dales’ as dey called up norf – are populated, by very pleasant villages actually, but in between them are moors, proper moor. With those special Moorland roads, ones that are just a winding ribbons of tarmac set down directly on the wild, borderless heathland.

I love it. Although I’m not sure I could live here, it doesn’t have the archaeological and topographical detail of the moors of home, no real sense of connection to the ocean either but it certainly holds some sway over my sensibilities and I admit that I do not know it nearly as well. Evidently it has it’s own secrets and knowledge to reveal that staying with it would surely uncover.

Remote and sparse, the great poet W.H Auden felt the magic here keenly. Perhaps initiated into its mysteries, he felt the connection we forge to certain landscapes and the names within them. The place names here are indeed evocative;  Rookhope, Cauldron Snout and High Force,  each found their inexorable way into his poems.

I’m living in Durham for the year as I attempt my much waylaid Masters degree and I’m very glad to have this lump of upland close enough for me to escape to. Like many country folk put into the city I crave the freedom of space and ‘The Roof of England’ as they call it has it in abundance. A somewhat overlooked AONB it seems, it is remarkably devoid of ramblers (something in common with Bodmin Moor), passed over perhaps for the high romance of the Lake District and the slightly more civilised Yorkshire Dales.  It does though, have a ski field, forsooth, something that caught me off guard as I drove by years ago in my little van when I was exploring the land outside of Kernow.

Those were great adventures, when I was motivated by my lack of exploration of my own country, something many people share. In New Zealand I often met people who spoke of escape from Britain, from their hometowns, like it had become too much to bear. I know what they mean, I have felt it too, but there is something about England.

It is overly populated, ugly and expensive. People are poor and kept that way various forces (we are one of the richest nations on earth yet to live comfortably on ‘minimum wage’ is an impossiblity), there is no ‘wildness’ left, nearly every part of the country shows the damage of humanity; of our toils and efforts, interference and greed. Our biodiversity is shrinking. The cities are largely bland and grey, the new buildings are uniform and uninspired, the high streets homogenised, everything is bought and we need to buy everything, the people can be aggressive, mean-spirited and cruel, lacking imagination, scope and drive, as grey in their souls as pebble-dashed estates. The main roads and motorways are bleak, bland and deadly, clogged arteries, the industrial estates and retail parks that encircle nearly every town are all identical in their bland oppressive atmospheres. But, for all this England is underrated.

There is good everywhere, people are also warm, kind and happy much more than they are mean, they struggle and strive to find their own meanings and live accordingly,  everybody has their hobby, passion and families, if they look of course. The same etches of human toil can be beautiful marks of humanity: churches, hay bales, fields, even the moors themselves.  The cities have their small but thriving pockets of creativity, colour, imagination, rebellion and subversion. It is still so green, the Atlantic ocean of home so blue and clear.  It is cleaner than it was. There are crisp winter days amongst bare oak trees in a park, watching happy people mill with loved ones. There is swimming in the deep green Avon river underneath a weeping willow in June, a deserted beach in Cornwall, good food, pubs with friends.  There is beauty even in the unkempt scrub of an industrial estate, for there are the largely eradicated wildflowers that have been left to live. There is much to be done, but much to be savoured. Modernity is remorselessly destructive, greedy and ugly but also people are relentlessly creative and loving.

There is a sense I get when I walk in England, even when I drive in it, a connection to the land and history – some would call this land-magic – it is a connection with something much deeper and older than all of the things I list above. As if the land itself has a soul. It has its own taste or aura, spirit or quality, it is energising and is ultimately what brings me back here and when I feel oppressed by negativity and depression, as I suppose we all are at times, I can find it.

So with metaphysical claims about the land aside I will tell of a walk up in these rare hills.

A few weeks ago I decided to head out to High Cup Nick where not so long back – geologically speaking – the glaciers that dominated England north of the Severn river carved out a rather picturesque, almost perfect u-shaped valley. This is the very edge of the North Pennine upland and the high land abruptly drops into the flat and fertile Vale of Eden.

The walk starts in a small village called Dufton in the Eden Valley and from there you skirt the edge of the looming fells until you turn up into them, coming into the almost perfectly shaped valley of  High Cup and walking up the moorland stream to its irruption from the bedrock. I think I did the walk backwards by the way, it seems you are to descend the ‘Miners Track’, not ascend it but whichever works.

It was a genuinely tough climb up, my legs actually gave out, something that has never previously occurred to me, and I had to stop and munch my Greggs sandwich, which it may be fairly claimed to be the absolute worst sandwich I have ever eaten, but I was ravenous. I blame leg day.

It was a cold day in October and the winds that met me when I clambered the precipitous path to the top of High Cup, were fierce, sharp and cold, coming straight from the north.

When you stand up here, looking out over the flat valley to the Dales and the Lakes you can really imagine the glaciers. Where only the highest peaks would just be visible. The rest just barren ice.

I can’t say enough about the view here, it really may be one of the most beautiful I’ve seen in England. I plan to camp up here in Summer and wake up to it. 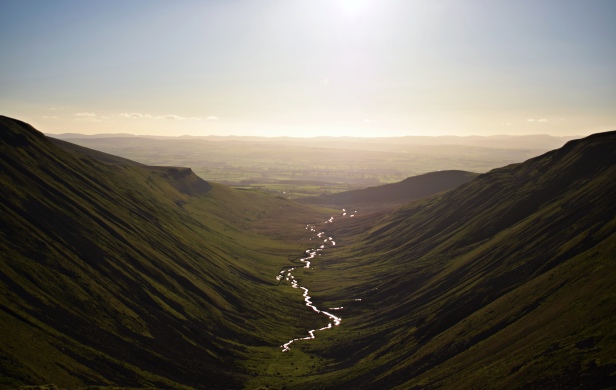 The walk back was much easier, traversing a wide path along the right hand side of the cup, where it descends (relatively) gently to Dufton. I was happy to choose a particularly beautiful time to return. The sun was setting over the distant jagged crest of the Lake District and the calm, quiet of dusk was with me as I walked through the milder, tamed, sheep-grazed farmland. My boot crunch sending a rare hare skitting into the undergrowth as Foxes started to stalk the fields.

Sounds seem to sharpen at dusk, tractor trailer clank, a car in the distance, bull bellow and sheep bleat. Senses alert and heightened but also emotions, in this case; satisfaction and happiness. 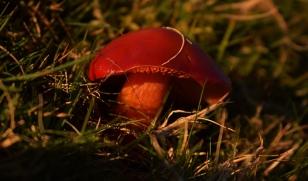 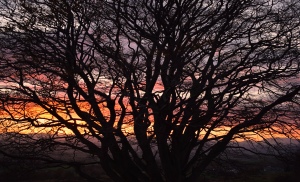