The Moor is an occult place in all senses of the word. Mostly bypassed, hidden in plain sight, it dominates the landscape yet it is diminutive in the scale of most uplands. It is a world given to juxtaposition. Alien and natural, wild yet tamed, secretive yet exposed, wandering up here is to be amongst inaccessible, ancient secrets that are not given readily or to the uninitiated. It is not the Cornwall that most know. Moor walkers, dwellers, admirers extoll the virtues yet keep favoured places to their chests; a place to retreat to. A place of ancient serenity retaining its peace even in the hectic six weeks of Summer.

It is a sacred place and has been so for millennia, the land and air is palpably infused with thousands of years of meanings, venerations, fears, loves, deaths and lives. This is part of the magic of the moor. The tangible and intangible traces left by otherwise untold generations of human life.

Walking the granite crumble of Rough Tor with a friend, I was blithely and haughtily pointing out various things I had learned from Time Team and passing off as knowledge when I caught sight of the uncanny stacks of stone on the summit, preternaturally resembling some kind of walled fortress. Not for the first time I imagined them constructed by some ancient giant race of beings, gods perhaps, usually this a thought whimsically dismissed. This time, I was listening to my friend speak and the thought took its opportunity to linger, when I resumed within my own brain I struck upon something.

People must have always looked at the Tors and instinctively seen the work of something powerful yet unseen or extinct. A God, the Gods, a forgotten tribe of powerful ancestors, a race of giants or even the power of the earth.

Modern eyes are in the privileged position to know with certainty that the seemingly unerring Tors are the current manifestations of the architecture of the Earth itself and its implacable processes. However, even this scientific answer holds a mystical dimension. The inconceivable age involved far exceeding humanity, the relentless slow power and the confrontation of the idea that that which seems eternal to us in our lifetimes crystallises into fragility when spread out over aeons.

I am sure this instinctive knowledge, that the tors were created somehow, is one of the reasons why the moor holds sacrosanct, what made it hallowed ground to begin with when the first people came. It is an obvious realisation really but one obscured by the tors themselves and the desire to understand them.

Those Paleolithic, Mesolithic, Neolithic and Bronze Age peoples who found homes on and around the Tors, who cleared the stunted ancient woodland with fire and who deigned to build the enigmatic megalithic monuments we revel in attempting to understand, these folk would surely have assumed divine or mystical ancestral origins to these strikingly artificial looking yet impossible to recreate granite formations defining and marking the landscape in so many ways that were useful to the earth-and-sky-wise Moorfolk. Way-markers, vantage points, topographical landmarks, cairns, sacred burial mounds, abode of Gods, shelters, defensive positions. Enough uses to start to assume they were placed there deliberately for them.

It fits that veneration and mythologizing of prominent or important topographical features is a commonality amongst many cultures and tribal societies right up to the modern day. I have recently returned from New Zealand and on the North Island there, where the majority of the Maori live, the great Volcanoes that dominate the landscape there each have personalities, stories and legends that surround and cling to them like the long white clouds.

It occurred to me that it could well be that the Moor-folk of the Neolithic and Bronze Age, with their gradual shifts into more static and pastoral living, were moved to recreate this enigmatic architecture. Inspired by some imagined being constructing these impossible stacks long ago. It is human to observe and recreate. Hence we have the mysterious stone-circles and dolmens. I would not posit that it is the only reason for megalithic monuments but it may be part of their inspiration.

It could be that the idea that the Tors are the work of ancestors, gods or giants motivated our moorland kin to both call this home and to achieve the seemingly impossible. To come up with the means, technology and drive needed to manhandle incomprehensibly heavy menhirs into precarious positions and to try to work out the meanings of the Tors before them. As we marvel and puzzle at their work, their dolmens, passage tombs, henges and stone circles, so might they have done with oddly shaped precisely balancing boulders of Stowe’s Hill and Rough Tor, the peculiarly deliberate looking outcrops of Garrow and Hawks. 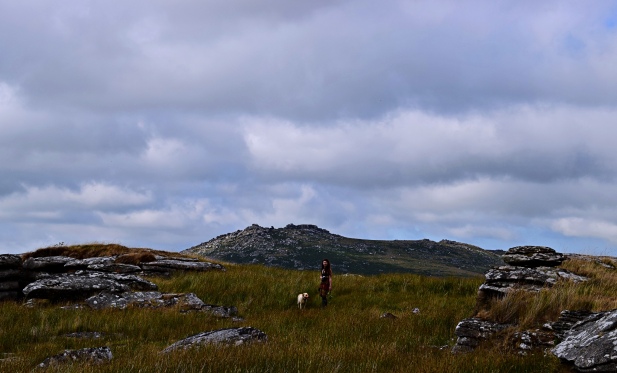 Inspired by the landscape, the tors themselves and their interpretation of what was before them, to achieve what these gods or deified ancestors apparently could. A functional and artistic testament to them and themselves, stirred by what they had assumed was created. The megalithic monuments that we pore over are, amongst other things, a monument to the Tors and those that had created them, an attempt to reach them in the enduring medium of stone.

The granite is the Moor after all. Everything that endures up here – and anywhere – is built with it, the same stone of the Tors. Blended in with the land. This was understood as surely then as now.

The oldest farmsteads, drystone walls, the abandoned houses still standing, churches, the stone circles and dolmens that are older than Pyramids are all the same pale granite. Eventually they will weather and crumble away but the Tors themselves still last longer than invented gods, farmsteads, pyramids, humans, trees and even the moor as we know it but the whole time they are there and there are humans to interact with them and interpret them then they will continue to inspire. 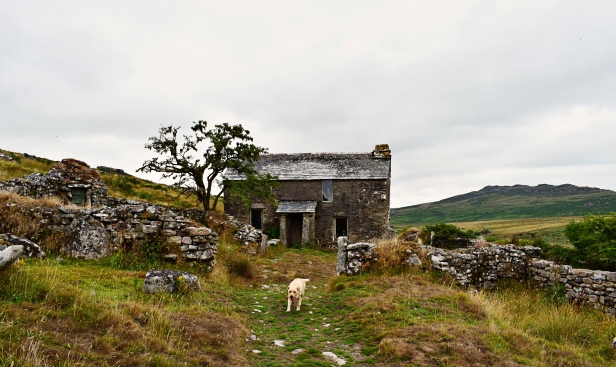 One thought on “The Tors”