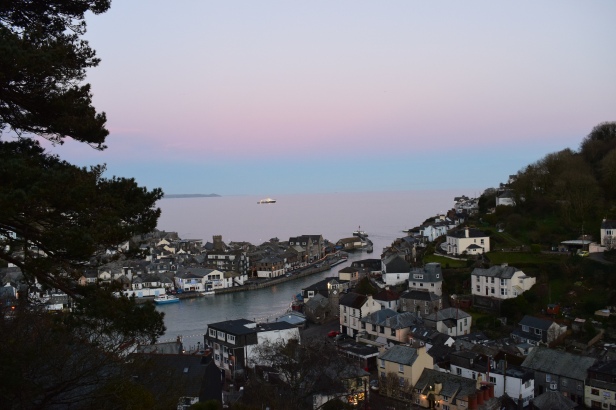 I haven’t lived here long. Ent no Looe boy.  I did grow up in close proximity to a very similar place though; Mevagissey.

It’s scarcely a hidden wonder. A summer town, out n’out. Packed to the gills in Summer, dead as the by-catch in the winter.

Visitors have a complex relation to Cornwall but Cornwall has an equally complex relation with visitors. We rely on Tourism, no doubt, but there’s an air of putting up with it. Whether it be eye rolls at mispronunciations (Fow -ee) or slightly more than an eye roll at the inexplicable inability to judge the width of a vehicle.

Any tourism hotspot comes with a more jaded side, locals in these areas, wherever it may be – Ko Pha-Ngan, Paris or Polperro –  can be aloof, cynical, even a tad superior.  Its static vs mobile. This faint strain in the collective mentality is most readily visible in the sometimes muttered Cornish name for tourists;  ‘Emmets’, meaning ‘ants’. I dislike this, we are all tourists at some point.

“There are good people everywhere. Except Cornwall.” My Grandad, a Lancashire man, said that, one of the few people I know who remains completely impervious to absolutely anything the place has to offer. That is a subtly valuable piece of advice but we can safely include his omission; there are most certainly good people here too.

Cornwall is contradictory. Welcoming and aloof, friendly and mean, beautiful and ugly, inordinately wealthy and soul sappingly poor. I can say this I feel, the way you feel you can criticse your parents.

In a stark contrast to anything people tend to write about the county, the spine towns; St. Austell, Bodmin, Liskeard, Redruth or Cambourne. – where most Cornish people actually live – are littered with social problems; drugs, violence and poverty and these problems can spill over into places like Looe, Mevagissey St. Agnes and the like. Stick around Looe or Mevagissey into the small hours on a busy weekend and you’ll see what I mean. Again though, you are far more likely to end up embraced, singing sea shanties with a Cornish fisherman. Who’ll then deck you. No, I’m joking of course.

These things are also not peculiar to Cornwall of course, they are rife anywhere a town loses its soul, and Cornwall’s soul, for long time, was mining and industry. Particularly clay and tin (fishing also, but that survived though not unscathed).  This soul is being gradually filled by tourism, and thanks be to that, but this slow renourishing has yet to – and probably won’t – reach the spine towns. Have a look at them and you’ll see this and why.

If you allow for a collective essence of a land then the Cornish are not poetic and mysterious like the Irish, not really as empassioned and virile as the Welsh or as self-confident and proud as the Scots but they are quietly, yet fiendishly, practical and industrious and it feels that we have yet to find a viable collective outlet for this in the modern age. It feels, to me at least, as though options are limited.

That is whimsical talk though and should not be given a shred of credibility. I’m supposed to be an academic.

Looe is actually one of the fishing ports left here that retains a moderately healthy industry. The trawlers make their stately way in and out each day the weather and tide permits and early in the morning, if you rise with the sun, you can buy some of the freshest, most coveted fish in the land.

I like it though on the whole, its brash and a bit rough around the edges but it manages as a place to appeal to all people, it is far more kitsch than Polperro or Fowey but all the more endearing for that.

There are a few pockets of very English Riveria’esque buildings. This is undoubtedly unusual on the South Coast. The vast majority of towns did not become tourist destinations until mobility and modern transport links (functioning roads) opened them up. This is why quaintness reigns supreme in small coastal villages and they predominantly retain their muddled squatness – they were inaccessible and thus off the radar of the Victorian and Georgian trends of holiday and spared the resultant development.

It was no suprise then to learn that Looe was indeed a destination for the affluent middle classes of Plymouth and beyond, who had presumably grown tired of the swiftly cliched bucket-and-spade desitnations of Paignton, Torquay and Teignmouth, instead opting for something slightly more rustic. Hipsters are, it seems, a historical constant.

Looe splits – like U.S. Hip hop – into East and West. I’m not entirely sure which was first, probably both sprung up along side of each other (early settlers would have just paddled/sailed between). East Looe has the most development so was probably historically consistently more populous. This is where the high street and the standard seasidey shops are to be found – apparently people do actually buy whitewashed planks with meaningless words on them, who knew.

The West is slightly more affluent and quiet (I live in the West but whilst I may be quiet I am most certainly not affluent). It stretches out to Hannafore Point, with a long promenade around the point looking out to Looe Island.

Looe island is an interesting place, steeped in history. Prior to the advent of Christianity is pretty much open to speculation but it’s a good defensive position and given the propensity of the Iron Age folk to build and dwell on pronounced coastal areas it was probably inhabited as a promontory fort. A bold theory even posits J.C. himself landing here, which is frankly a rather big claim for somewhere so innocuous. A hermitry and celtic chapel sprung up when the pious tide reached Cornwall, a sister chapel on Hannfore Point still remains as foundations and it retains a beautiful name; Lammana. After a fair old stretch of intrigue and smuggling, during which presumably the current buildings were built, the Island was somehow purchased by two enterprising sisters who wrote about their purchase and subsequent (enviable) life in two excellent books.

The Island was generously bequeathed to the Cornish Wildlife Trust after Bab’s death and it can be reached today. I don’t intend to pay for the price of entry, I have a certain aversion to such things, but I do aim to paddle out there at some point and the results will of course be published here.

It’s actually hard to write about a place you live in. I think can sum this entry up simply enough though.

Looe is Looe. That’s all. It’s all of the contradictions and moods of Cornwall in one place. Visit though, for that reason.